Is apps a real word now?

We’re all familiar with the Apple iPhone ads. (You’re not? Where have you been?)

Those TV and press ads, where they discuss all the apps you can get at the Apple App Store for your iPhone. There’s an app for dividing a restaurant bill. An app for finding out where your friends are. And an app for discovering if you’re a moron or not. (Seriously. Currently only 99c instead of the usual $2.99. Go to the Apple App Store to download your app now.) 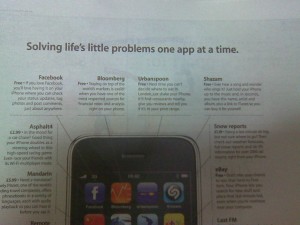 We all know that app is short for application. But it used to be a bit of a geeky word didn’t it? And not an actual real word.

But have you noticed it’s now become mainstream? Not app. with a full stop to show it’s been shortened. But just app on its own. As bold as you like.

And despite the fact it’s acknowledged by most online dictionaries as ‘an informal and shortened version of computer application’, and not an actual word, I’m with Apple on this one.

Because advertising copywriting is all about using the language of the people you’re trying to reach. (And with Apple iPhones, users are more likely to be 18-24, male, and from an affluent urban background. And trust me they’re gonna use the word app.) It’s not about using perfect English. If a word has moved into everyday use but has not yet reached the Oxford English Dictionary, so what? Use it anyway.

Which only leaves one question: what app shall I download today? The abs workout or Peggle?