Is the education system failing our children?

Depressing news in The Independent this week: Overseas students are better at English than British students.

According to Professor Bernard Lamb, who carried out the research, British undergraduates are nearly three times more likely to make errors in written English than those from overseas.

After spending a year studying the written work of his students, Lamb was appalled by spelling errors such as flourescence, alot, seperate, yeild, relevent and introduications.

Grammatical errors included ‘done by my partner and I’ and ‘a women’. Whilst poor punctuation ranged from the misuse of semicolons to a complete lack of possessive apostrophes.

The Queen’s English Society, of which Lamb is president, blames the errors on a “widespread deterioration in standards.”

Lamb goes on to say that “we need to raise the very poor standards of English by more demanding syllabuses and exams, more explicit teaching and examining of English (including grammar, spelling and punctuation) and by consistent correction of errors by teachers of all subjects.”

And I couldn’t agree more.

The wishy washy liberalism that has pervaded our education system means there’s a reluctance to correct written work. There seems to be a belief that pointing out a kid’s poor spelling, sloppy punctuation or bad grammar will somehow thwart that child’s creativity.

Good grammar and punctuation skills are the foundation on which great writing is built. Kids that get the ‘rules’ enjoy the act of writing a whole lot more. It’s like explaining the offside rule to a kid who wants to be footballer; the more he understands the game the more fun it is.

Lamb demands a more “consistent correction of errors by teachers”. But the real worry is that teachers themselves have a poor understanding of the English language.

Take a look at this picture sent to me by Twitter pal @racinghippo. This came home with his daughter’s homework this week. Scary, isn’t it? 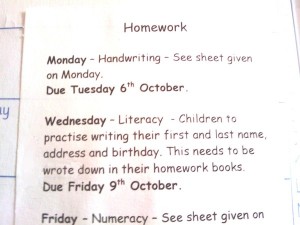