An Englishman’s home is his castle, pad, dig, shack, crib, gaff…Evolving English at the British Library

If you’re in the area of Londinium between now and April 3rd, get yourself down to the British Library for their Evolving English: One Language, Many Voices exhibition.

The exhibition explores the beginnings of Anglo Saxon right through to current rap music and shows how English has evolved over the last 1500 years from its small island origins to become one of the world’s most popular languages.

So what’s to see? There’s a 1000-year-old version of Beowulf; works by Chaucer; the King James Bible, ‘an eye for an eye’, ‘salt of the earth’, the sign of the times’ and all that. Plus first editions of Shakespeare who, of course, introduced us to such words as eyeball, puking, mimic, amazement and rant. 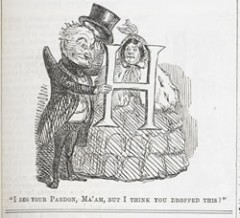 But it’s not all high-brow malarkey. There are video clips of My Fair Lady’s Eliza Doolittle “Well if I was doing it proper, what was you sniggering at? Have I said anything I oughtn’t?” And recordings of Kenneth Williams speaking polari – a sort of gay slang – as Julian in radio’s Round the Horne “How bona to vada your jolly old eek.”

One of the pamphlets on show, published in 1854, advises the lower middle classes that if they wish to climb the social ladder they shouldn’t drop their aitches. Head and house should never be pronounced ‘ead and ‘ouse although the aitch in herb and hospital should remain silent. A tradition we’ve now done away with in the UK although the US continues to say ’erb.

And there’s an amusing section on U and non U English usage (upper class and non upper class). Amusing, because I can recall being told off as a child for saying serviette instead of napkin. U words include napkin, lavatory, vegetables, lunch, sofa and pudding while non-U are serviette, toilet, greens, dinner, settee and sweet.

As part of the exhibition, you can record your voice for future linguistic studies. I felt it was my duty to have the dulcet tones of my sarf London accent saved for posterity. And duly obliged by reading Mr Tickle by Roger Hargreaves (pronouncing Tickle like a true Laaandaner: ti-kawl)

What this outstanding exhibition so clearly demonstrates is how there’s no such thing as pure English. It’s an ever evolving language, influenced by social, cultural and historical changes, continuously incorporating words from other languages and happily discarding words it no longer has use for.

If you love etymology, you’ll love this exhibition. It’s on until April 3rd and it’s free.