Why I’m merry as a pismire: Historical Thesaurus of the OED is finally finished

Did you know that the English language contains more emotionally positive words than negative words? In fact, it’s about a 60:40 ratio. Surprising that. Considering having a good old moan is practically a national sport.

The reason we know this is because the Historical Thesaurus of the Oxford English Dictionary has recently been published; and what a beauty it is.

Conceived and compiled by the Department of English Language of the University of Glasgow, it’s the first historical thesaurus to include (almost) the entire vocabulary of English from Anglo Saxon times to present day. And it’s taken 230 editors, research assistants, postgraduate students, staff and volunteers the equivalent of 176 man-years to complete.

Professor Kay, now aged 69, started working on the project in the 60s at the tender age of 27.

“I sometimes doubted that we would ever finish it. You are going round in circles the whole time. If you move this word or that word you might improve it. You could do it for ever. But you’ve got to pull the plug at some point.” 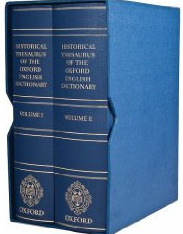 So how does the HT of OED work? Well, it comes in two weighty volumes with 3952 pages, 800,000 meanings and 236,000 categories and sub-categories. The words are listed chronologically, rather than alphabetically. So you need to look up your word in the index in volume 2 then refer back to volume 1 for the list of meanings. For a word lover this is like being let loose in the proverbial candy store.

So what delights await us?

Or how about hurling insults? Today, we may yell a colourful arsehole when we’re cut up by some idiot on our drive to work. In Anglo Saxon times an earming, wyrmlic or hinderling would have been more appropriate. Shakespeare may have hollered dogbolt, drivel, marmoset, skitbrains and shack-rag. While later insults included fitchcock, muckworm, whiffler, ramscallion, squinny and snool. You effing squinny! Yep, that works.

Even words that are now obsolete are listed with their last know date of use.

Christopher Hart, writing in the Sunday Times calls it “a magnificent, 4000 page treasure chest, a permanent monument to the anarchic energy, good humour and generosity of our language.”

While Henry Hitchings in The Telegraph said:

The work enables microscopic study of almost all our recorded vocabulary. We see words not in isolation, but through their relationships. To quote the linguist David Crystal: “The OED gave us individual trees, but never a sight of the whole forest or helpful pathways through it. The Thesaurus does precisely that.”

If anyone is stuck on what to get me for Chrimbo, I’d like the Historical Thesaurus of the Oxford English Dictionary please. And I’ll be as merry as a pismire.