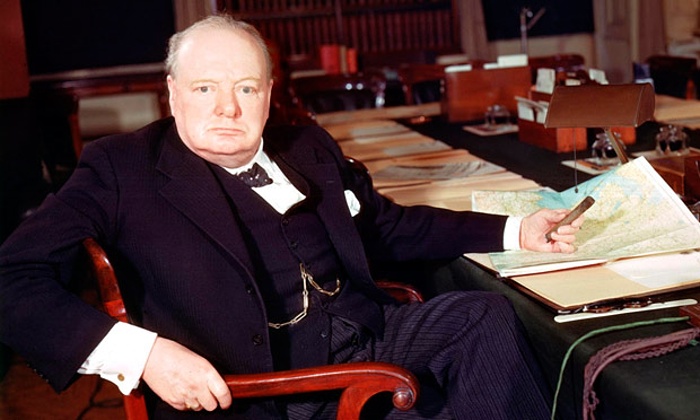 I was thinking about Winston Churchill the other day, as you do. Actually I was mostly thinking about some of the rhetorical devices Churchill used in his speeches, such as anaphora. And that’s because I’d written different sectors, different clients, different countries in some copy and I was explaining to the client how that was ok.

Anaphora, you may recall is the repetition of a word or phrase at the beginning of a clause for dramatic effect. Take this quote from Churchill delivered to the House of Commons in 1940.

Powerful. I can’t imagine Cameron or Corbyn being able to pull this off. (Let’s hope they never have to.)

Unlike most modern politicians, Churchill was a phenomenal writer and wrote all his own speeches. He even won the Nobel Prize for Literature in 1953 and claimed “history will be kind to me, for I intend to write it”.

As John Kennedy stated: “In the dark days and darker nights when England stood alone – and most men save Englishmen despaired of England’s life – he mobilized the English language and sent it into battle.”

Here are some of Churchill’s other rhetorical techniques.

Alliteration
The repetition of the same letter or sound at the beginning of adjacent or closely connected words:

“I see also the dull, drilled, docile, brutish masses of the Hun soldiery plodding on like a swarm of crawling locusts.”

“We want no parlay with you and your grisly gang who work your wicked will.”

Antistrophe
Repetition of words at the end of successive phrases.

Antithesis
The juxtaposition of contrasting ideas in balanced phrases:

“The government cannot make up their mind or they cannot get the prime minister to make up his mind. So they go out in a strange paradox, decided only to be undecided, resolved to be irresolute, adamant for drift, solid for fluidity, all-powerful to be impotent.”

“If we are together, nothing is impossible, if we are divided all will fail.”

Antimetabole
The repetition of words in successive clauses, but with their order transposed:

Assonance
Similarity in the sound between internal vowels in neighbouring words.

“The odious apparatus of Nazi rule.”

Accumulato
Bringing together various points made throughout a speech and presenting them in a climatic way:

“Your organisation, your vigilance, your devotion to duty, your zeal for the cause must be raised to the highest intensity.”

Cacophony
Use of harsh phrasing for effect:

“If we fail, the whole world, including all that we have known and cared for, will sink into the abyss of a new Dark Age made more sinister by the lights of perverted science.”

Hypophora
Asking a question and immediately answering it:

“You ask, what is our policy? I can say: It is to wage war, by sea, land and air, with all our might and with all the strength that God can give us; to wage war against a monstrous tyranny, never surpassed in the dark, lamentable catalogue of human crime. That is our policy.

“You ask, what is our aim? I can answer in one word: It is victory, victory at all costs, victory in spite of all terror, victory, however long and hard the road may be; for without victory, there is no survival.”

“Business carried on as usual during alterations on the map of Europe.”

Metaphor
Comparing two things (that are often not alike) by stating that one is the other:

“From Stettin in the Baltic to Trieste in the Adriatic an iron curtain has descended across the Continent.”

Metonymy
Use of a single term or image to represent a wider concept:

“We welcome Russia to her rightful place…we welcome her flag upon the sea.”

Paraprosdokian
A sentence or phrase that has an unexpected ending:

“You can always count on the Americans to do the right thing – after they have tried everything else.”

Paronomasia
The use of similar-sounding words or phrases:

‘To jaw-jaw is always better than to war-war.”

“Now the enemy [Germany] is busy in Russia is the time to make hell while the sun shines.”

Simile
A comparison between two fundamentally dissimilar things that have certain qualities in common:

“(General de Gaulle) … had a face like a llama surprised in the bath.”

Tricolon
The use of words, phrases and examples in threes:

“Never in the history of human endeavour has so much been owed by so many to so few.”