When Language Bubbles Burst: One girl’s struggle for peace and quiet

This is a guest post by writer Sally Gurteen (who btw was my 1500th follower on Twitter and consequently won herself a pack of Turner Ink pencils.) She used to live in Barcelona. Now she’s back in blightly.

There are many things that I missed about England when I was living in Spain. My daily cup of tea was never quite right, finding marmite was like the search for the Holy Grail and don’t even get me started on the pitiful selection of cream in the supermarkets. Qué desastre! However, all delicious things aside, something else was happening, something way more profound and something whose workings I was utterly oblivious to.

It hit me like a speeding train, even though in hindsight I realise that it had been creeping up on me stealthily like a beast most foul in the night. Little by little over time, my behaviour had been moulded and formed by the daily ins and outs of my new life in Barcelona and I had become a very different person indeed, and yet I hadn’t even noticed.

Now, when anyone moves to a country that isn’t their own, the greatest and foremost hurdle is the language. You do your very best to learn, you shyly speak to the locals in your attempts to use a natural accent and you listen carefully in the hope that you might pick up a more colloquial, native lingo.

Someone once told me that I could learn Spanish in three months. It would be easy. No problem. I would love to find that person now and forcefully slap them round the chops with a hefty leg of Iberian ham. You will realise pretty damn quickly that learning a new language is not easy and is actually thoroughly exhausting.
The things you won’t realise necessarily, is how very much being exposed to a new language can change the way you think, the way you act and, what I have come to discover, the way you listen.

Or don’t listen, more to the point.

You see, if you’re not fluent and you’ve had enough ,you can simply switch off and what’s more, you don’t have to switch back on again if you don’t want to. The result is that you can spend minutes, hours and days surrounded with only the voice in your head. That creepy man on the corner might be saying horrendously offensive things to you but who cares? You’re not listening. That couple on the metro might be plotting world domination but la la laaaa and that woman making small talk with you by the vegetable stand? Smile sweetly, say ‘si, si’ and she’ll just think you’re shy. You’re not listening but you suspect she was praising the plump pomegranates and that’s enough for you.

And so listen to the daily humdrum I did not. I went about my merry way, tuning in and tuning back out again when I felt like it. Life was sweet and lovely and peaceful.

It seems my language bubble has burst. I’m back in my native land, I’m slowly overcoming the reverse culture shock and little by little, the daily humdrum has risen to a deafening roar. At first my ears would only prick up to the sound of a nice old man with a gentle voice. Or the oh so cute little girl singing to herself. It was such a pleasure to understand. It felt homely and warming.

Language has flooded into my head and I can understand every bloody word that every bloody person is saying. And I’m not enraptured, let me tell you that. 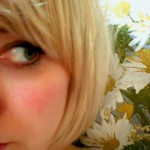 That creepy man is telling me he wants to suckle upon my sweet bosom. That couple definitely have weapons of mass destruction in their basement and that woman making small talk by the vegetable stand? She’s the f***king anti-christ.